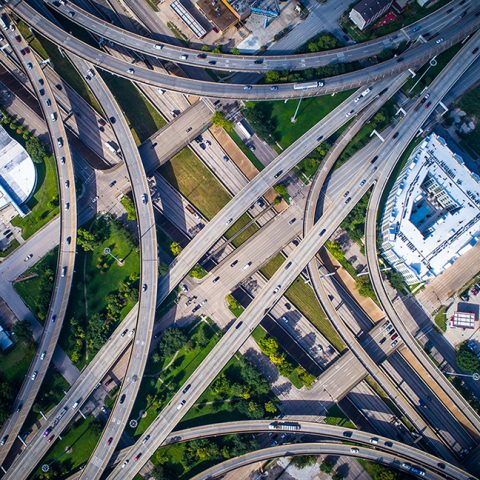 Following January’s equity melt-up, February saw the sharpest equity reversal in seven years as “warmer” economic reports and the enactment of additional fiscal stimulus triggered U.S. inflation fears. The unwinding of various flavors of short volatility strategies—risk parity, commodity trading advisors (CTAs), short volatility exchange traded funds (ETFs), and targeted volatility insurance products—contributed to the speed of the decline, as the VIX (equity volatility index) reached its highest levels since 2015. Global equities fell 4% uniformly across segments; bonds were unable to serve as a portfolio anchor, losing 1%, as it is hard for a hedge to be effective when it is the catalyst for the equity market decline. The dollar ended higher after a volatile month, while weak energy prices weighed on the commodity complex.

Domestic equities finished the month down 3.7%, but a more revealing figure was the intra-month low, which featured a 12% peak-to-trough move. Growth outperformed value by 200 basis points across capitalizations; sector divergence was pronounced, with technology remaining in the black, while energy fell double digits on lower oil prices and warm winter weather.

Overseas, both advanced and emerging market equities returned -4.5% with growth and small cap modestly outperforming large cap and value issues. European shares fell nearly 6%, with little distinction between core (Germany down 7%) and periphery (Italy and Spain down 6-9%). Japan was the relative outperformer among advanced economies, falling only 1.5% despite the strong yen’s pressure on economically sensitive sectors as the reappointment of Bank of Japan Governor Kuroda promised stability, unemployment fell to 2.4% and the marking of 2 years of quarterly growth for the first time in 28 years. The emerging world declined as fund flows reversed after more than a year of monthly inflows. However, local interest-rate cuts help support Brazil (-2%) and Russia (+1%, where a ratings upgrade offset lower energy prices). India fell 7% as the trade deficit widened on increased oil imports.

As discussed in last month’s letter, two reports in the first half of the month triggered fears of higher inflation and consequently higher and/or more rapid Federal Reserve Board (Fed) interest rate increases. While the acceleration in hourly earnings to 2.9% could be dismissed as January winter storms may have altered the employment mix, the mid-month report showing that core Consumer Price Index had risen to 2.9% (a six-year high for the three-month annualized number) was harder to overlook and suggested that the decline in the dollar over the past year may be contributing to higher goods inflation.

Just as the US is beginning to transition away from unorthodox monetary policy, it is doubling down on unorthodox fiscal policy. With respect to the latter, Congress passed a budget deal that will extend the debt ceiling until next March while increasing discretionary spending by 0.7%. The budget deficit is likely to hit 6% of gross domestic product (GDP in 2020), as higher interest rates take their toll.

Finally, there was the seemingly usual string of good economic reports:

These positives more than outweighed some weaker reports: China had an unexpected drop in its manufacturing and services index and even in the US, new home sales and core durables disappointed.

No one should have been surprised that Fed Chair Powell acknowledged that economic conditions have improved, opening up the possibility of four rate hikes in 2018. While the Treasury market fell 0.75%, the bigger news was at the longer-end of the interest-rate curve. It lost more than 3% for the second straight month with 30-year interest rates increasing an additional 20 basis points as curve steepening confounded expectations. The inflation fear and associated government bond carnage was U.S.-centric, as the likelihood of continued ECB bond buying and concerns over the stronger Euro left European sovereign debt little changed.

In stark contrast to two years of an almost uninterrupted period of tightening credit spreads (which had served to cushion the pain from higher Treasury rates), spreads have widened, contributing to credit market losses. Divergent sensitivity to longer-maturity interest-rate risk caused investment-grade corporates to fall 2.1%, while high-yield peers fell less than 1%. Similarly, within high yield, the higher quality (BB-rated bonds) underperformed, while (floating rate) leveraged loans posted positive returns. All of this occurred in a month where three-month Libor passed 2% for the first time since the Great Recession. European credit markets underperformed over Italian election and Brexit concerns. Asian credit outperformed, helped by tighter spreads in China. Emerging-market-local-currency debt outperformed despite a stronger dollar, pointing out that rate normalization is a developed-market phenomenon. Municipal bonds lost only 0.3%. Within higher yielding municipals, Puerto Rican issues continued their recovery on signs of improved government liquidity and governance.

Interest-rate pressures caused the global real estate sector to underperform even global equities. That sector fell 6.6%, its worst month since May 2013, as US hotels and healthcare segments fell double digits. Finally, the master limited partnership sector fell nearly 10% on a confluence of lower energy prices and higher corporate borrowing rates.

The Dollar and Commodities

While the dollar gained 1.7%, its fortunes waxed then waned over the month. It initially rallied from multi-year lows after Fed Chair Powell dismissed the equity weakness as inconsequential, only to fall sharply after Congress passed an expansionary budget deal. The Canadian dollar and British pound fell 3-4%. The outlier was the Japanese yen, which gained 2% on safe haven flows.

Commodities fell more than 3%, weighed down by energy prices. Oil fell nearly 5% on surplus concerns as U.S. producers responded to higher prices with increased output. Production tracked 10 million barrels per day for the first time since 1970. Warm winter weather in the Northeast dashed hopes for an inventory shortage in natural gas, which fell 11%. A stronger dollar and less dovish Fed pressured gold, which fell 2%.

Markets quietly licked their wounds from February’s volatility over much of the month before quickly falling 5% on less dovish guidance from Fed Chairman Powell and the Administration’s plan to impose tariffs on Chinese goods. While unlikely to escalate significantly, the tariff issue highlights that growing political risks here and abroad will contribute to the pick-up in market volatility.

From the Fed’s perspective, the first three weeks of March have been quite satisfying: there has been some moderation in the strength of US economic reports; international growth remained strong; the January spike in wage inflation was reversed; and most importantly, the monthly employment report could not have been more supportive for its gradualist approach to rate normalization.

It would be a mistake to extrapolate the unemployment report (strong job creation, a spike in the participation rate, and minimal hourly earnings growth) into forecasting a return to the continuation of nearly risk-free equity returns. One of our managers put the 15-month streak of consecutive positive months (November 2016 through January 2018) into perspective: consecutive gains of more than eight months have occurred only 0.7% of the time over the past 90 years! No wonder that risk (volatility) was so mispriced entering February!

While financial markets stabilized over that period at modestly higher levels as the VIX declined 10%, there was little further extension of the market recovery from February’s lows as investors cautiously anticipated Fed Chairman Powell’s initial testimony and likely additional tariff moves against China. While Treasuries regained a third of February losses (as wage and inflation reports matched expectations and REITS recovered 3% from oversold conditions), equities were little changed and credit markets were flat to lower.

The Fed raised rates 25 basis points as expected, but Powell’s testimony was the big news of the month. While his guidance was much more hawkish than many expected, it was not only precisely in line with our thinking, but was probably the optimal policy path going forward, especially given his difficult starting conditions (financial conditions remarkably accommodative given asset valuations, growth, inflation and unemployment). We had expected that the guidance for three hikes in 2018 would remain (yes, but guidance was close to four hikes) and that the length of the tightening cycle would substitute for the speed of the tightening cycle (it did, with an assumed terminal short-term rate of 3.375% in 2020). Having said that, while the Fed’s decision to bump up growth and employment forecasts was appropriate, its inflation forecast was almost laughably optimistic. Only the halo-effect of the remarkably benign employment report prevented a more skeptical reception and a more negative market response.

Inflation has already arrived, at least in the US, as core inflation has reached a decade high 3.1% on a 3-month annualized basis, suggesting that trailing 12-month rates will pick up. In that context, the March inflation report has built-in upside risks, as some one-time 2017 factors roll off. While the Fed’s preferred inflation metric tends to run 30 basis points below the core CPI figure, its 2% goal should be hit before year-end.

It is hard to defend the Fed’s assumption that inflation will not exceed 2.1% after 2018 given its forecasts that unemployment will fall to 3.4% (well below any member’s estimate of full employment) with growth of as high as 2.7% (well above their estimate of trend growth of 1.8%). That evidence increasingly suggests that the Fed may be 75-100 basis points behind the curve and that the resulting ongoing need to tighten will trigger the next recession.

Shortly after the Federal Reserve developments, markets were spooked by the Trump administration’s announcement that new tariffs will be placed on $60 billion of Chinese goods. The most likely outcome is for the escalation to be contained as China’s initial response was restrained, the US farm vote is important (avoid agricultural retaliation), the overall US tariff rate is only 1.5% and the administration has a history of compromising after a strong opening bid (aluminum and steel tariffs have been watered down and NAFTA talks are proceeding). Having said that, President Trump has suggested that other trade and investment restrictions on China are forthcoming. Of note is that the headline US trade deficit just hit an all-time high and 50% of that trade deficit is with China. The tail risk remains, particularly as the mid-term elections approach and President Trump appears less constrained after the departure of some key advisors. Assuming that growth-crushing tail risk is avoided, financial stocks look like a compelling purchase on weakness given that (1) they are the worst performing sector this month, (2) they are somewhat insulated from trade issues, (3) fears of a flat-yield curve are overdone, (4) credit risks are low for now, and (5) regulatory attention has shifted to the social media space.

As the administration follows through on its campaign promises, populist parties also appear to be gaining strength in Europe as evidenced by the Italian election result. The “southern” populist Five Star Movement (as expected) won a plurality, not a majority, but the surprise was that the “northern populist” Northern League defeated the center-right party. Altogether, the two parties garnered 50% of the vote, compared to 30% in the 2013 elections. While the result does not present any near-term risks to the recovery in the economy or the banking system (year-over-year 15% decline in non-performing loans), it complicates broader Eurozone integration initiatives as Northern Europe will worry about Italy’s likely fiscal expansion and stalled reform initiatives.

More importantly, Brexit developments continue on a predictable downward spiral, with the latest being the “breakthrough” in setting terms for a 20-month transition period beginning next March. Unfortunately, the agreement is contingent on terms for the ultimate UK relationship with the EU being agreed to this fall. On that score, the hard-Brexit outcome of a Canada-like outsider status, without financial services passporting, remains the likelihood. In response to such a disappointment, a tail risk is that the Labor Party takes control under Jeremy Corbyn, an unreconstructed socialist (who might nationalize utilities). While some astute investors are taking advantage of the mark-down in UK asset prices (especially real estate), it is hard not to see vulnerability for gilts and the pound.